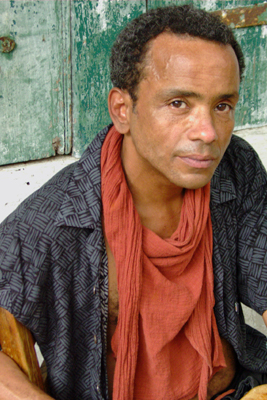 On Sundays, John Boutte was awakened by the sounds of his New Orleans neighborhood. Past the front yard, second-line parades rolled by, matching the madness of Carnival season and the transcendent joy of the jazz funeral. This roux of influences created John Boutte, and serves him to this day.

During his school days John played coronet and trumpet, those clarions of life in New Orleans, in his junior high and high school marching bands; he was a section leader, no less, in a town where marching bands duel like decked-out demons in the street. School also gave John the chance to sing, first at talent shows and then with street a capella groups, groups named — listen — “Spirit” and then “Remnant.” Linger for a moment on those names, and then let them resonate an instant longer, street bands singing on the bricks of a town where “street singer” is still a respectable job title.Take another moment and stir in the spices of the music that was on the turntables of his older brothers and sisters, the music that ruled the street and raised the spirits: Stevie Wonder and Marvin Gaye, the Jackson 5 and Roberta Flack and Donny Hathaway. During these years traditional jazzmen like Paul Babarin, Louis “Big Eye” Nelson and Danny Barker became both John’s friends and mentors. John’s sister, Lillian Boutte, introduces the young stylist to local legends like Dr. John, Allen Toussaint and James Booker.

After high school, John studied at Xavier University, a black Catholic institution known in New Orleans and indeed the entire Deep South. After graduating John was commissioned as officer in the U. S. Army, and provided with the opportunity to direct and sing in the Army gospel choirs in Virginia, Texas and, eventually, Korea. It was in Korea, ironically, when sinqing gospel and deep, deep blues after hours in restaurants he’d only accidentally entered, that he began to know himself as an American, an artist and a person. Not long after his return to the States, John was invited to tour almost the entirety of Europe with his sister Lillian. Europe was a set of lessons in languages and cultures and customs, which gave John a chance to meditate on the very idea of a life led as a jazz singer.

When John eventually got back home to New Orleans he continued singing. But now there was a new generation, a new breed of musicians available; musicians like Herlin Riley, Shannon Powell, Nicholas Payton and Bryan Blade. He began to open shows for the likes of Mel Torme, Lou Rawls, Rosemary Clooney and, most recently, Herbie Hancock. In recent times he has recorded three CD’s. Through the Eyes of A Child , Scotch and Soda, and the remarkable Jambalaya, recorded for Bose. Yet another CD entitled Gospel United, a concert recording arranged in Denmark, contains his remarkable solo arrangement of “The Battle Hymn of the Republic”, which has achieved Gold Record status in several European markets.

John still lives in New Orleans, next door to the home in which he was raised. Sometimes you can hear him singing, sometimes whistling, or sometimes you can hear him faintly from the street as he sits at his piano singing a Korean lullaby. John’s job is to sing — to sing jazz, to sing it with such style and grace that no one ever mistakes him for anything other than a master. John is one of those remarkable cases where the art arises from the true heart. To know John is to hold onto the coattails of a butterfly. To hear him sing is to feel a brief touch of the wing.