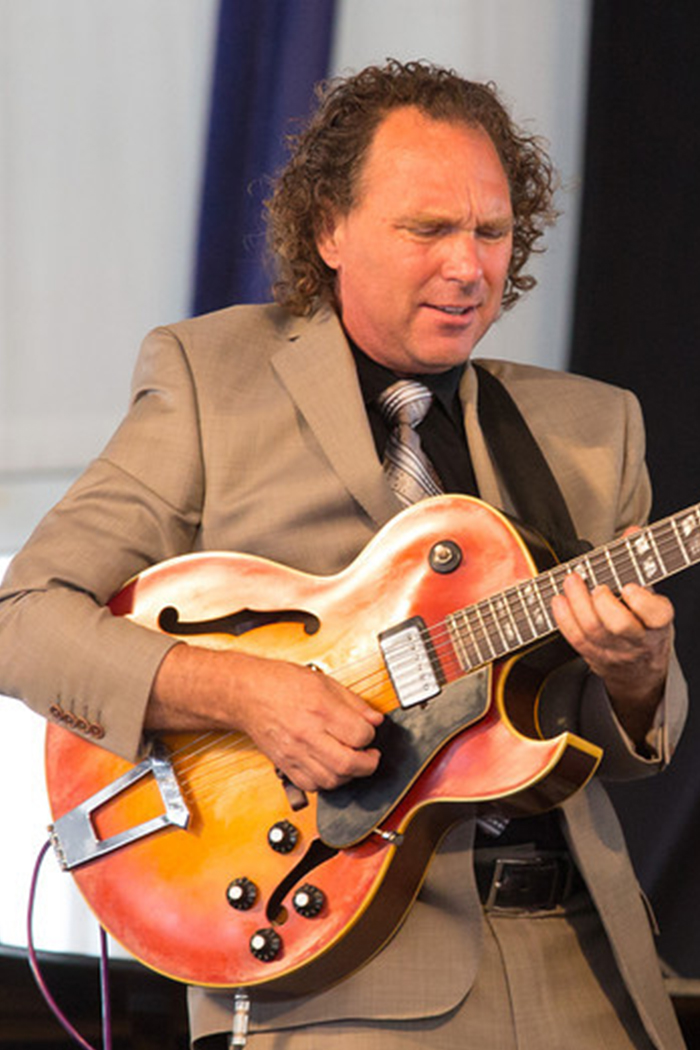 Dubbed “One of New Orleans’ best jazz guitarists,” by Gambit Weekly, Brian Seeger is on the forefront of the New Orleans music scene.

Currently, Brian works extensively with the Organic Trio, Cindy Scott, Evan Christopher and Brad Walker, logging nearly 100,000 miles a year touring. He has performed all over the US and Canada, as well as in Bolivia, Brazil, the Czech Republic, Equador, Finland, France, Germany, India, Italy, Kazakhstan, Luxembourg, the Netherlands, Peurto Rico, Spain, Switzerland and Turkey.

Brian is comfortable off of the stage as well, garnering critical acclaim for his work as a record producer and composer. His production credits include The Paislies debut disc on Fresh Sound, the Session’s This is Who We Are. Camile Baudoin’s Old Bayou Blues, Brad Walker’s Quintet, Alex Bosworth’s Here for You, Alex Bosworth and Hank Mackie’s The Night We Called it a Day, Martin Urbach’s Free Will, Cindy Scott’s Let the Devil Take Tomorrow, Jirka Hala’s Make You Wanna Hala, Quintology’s eponymous debut, The Hot Club of New Orleans’ More, Chévere’s Baila Mi Ritmo, Olivier Bou’s Bou-Shah-O-Ray, a disc that features Nicholas Payton, Steve Masakowski, and Stanton Moore, and The Jesse Lewis Union, as well as demo CDs for a number of his friends and peers. His compositions appear on the Organic Trio’s Saturn’s Spell and Home Remembered, Cindy Scott’s Let the Devil Take Tomorrow and Historia, Alex Bosworth’s Here for You, Theresa Andersson’s Vibes, two of Stanton Moore’s solo efforts, Quintology’s Blues by 5, Joe Krown’s Funk Yard, and on other recordings. He holds a Bachelor of Music, summa cum laude, from the prestigious Berklee College of Music, and also holds a Master’s degree in Jazz Performance from the University of New Orleans.

In the last decade or so, Brian has found some time to share his experience and insights with the next generation of creative musicians. He currently holds the Alvin ”Red” Tyler Professorship in the esteemed University of New Orleans Jazz Studies program. He has also taught at Loyola University and was the director of the National Guitar Workshop’s Jam Summit. Seeger has been a guest clinician and lecturer at many other jazz camps, colleges and schools around the world.

Besides his life as a musician, Brian has spent a lot of time traveling, in front of computers, and behind the stove. He spent a couple of years exploring India, Turkey, Sri Lanka, Nepal and Greece (the hippy years), hitchhiking, and sleeping in caves, ashrams, and olive groves, and financing his exploits by playing music on the streets. He has also traveled to Austria, Belgium, the British Virgin Islands, England, Hungary, Mexico, Russia, St. Maarten, the US Virgin Islands, Yugoslavia, and to airports in Denmark, Egypt (where he was thrown in jail), Pakistan and the UAE, and rode a truck through Bulgaria. He has visited and performed in Europe more than forty times. He was a youthful hacker, and has done graphic design, web site creation and Perl scripting, and artwork for many musicians (Astral Project, 3 Now 4, Quintology, etc). He also has owned a vegetarian restaurant, where he was cook, waiter, accountant, and the entertainment, and can still whip up some mean pancakes when called upon, or a Tiramisu if he really loves you. When he has to, he can be good with electricity and plumbing, too.